Guadalupe bass habitat use patterns at a landscape scale 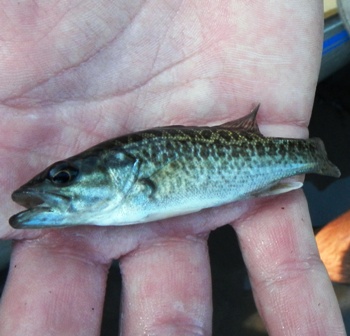 Guadalupe bass has the potential to be an effective indicator species of stream health in its native range because of its position near the top of the aquatic food web and its very specific habitat requirements (Edwards 1980, 1997, Stormer and Maceina 2009, Perkin et al 2010). Perkin et al. (2010) found that a population of adult Guadalupe bass associated with eddy mesohabitats created by instream cover within or near run mesohabitats. Habitats also included small to medium-size substrates, current velocities less than 0.1 m s , and depths of 1.0 m. They generally avoided open water and associated more with woody debris, boulders, and ledges (Perkin et al. 2010). Daily movements increased more than 200% as spring approached due to foraging activities and reproduction (Edwards 1980). They also tended to associate with pools of greater depths during periods of extreme low flow in the summer (Perkin et al. 2010). These associations render Guadalupe bass sensitive to habitat alteration. The official Texas state fish, Guadalupe bass is endemic to the streams and rivers of the northern and eastern Edwards Plateau in central Texas, including portions of the Brazos, Colorado, Guadalupe, and San Antonio basins (Hubbs 1957b, Edwards et al. 2004, Broad 2008, Hubbs et al. 2008). It is currently listed as a species of greatest conservation need by the state of Texas due to decreased stream flow, habitat degradation, and, especially, introgression with introduced smallmouth bass Micropterus dolomieu (Edwards 1980, Hubbs et al. 2008). Habitat degradation is thought to have resulted in declines in their abundance; however detailed habitat data is lacking, i.e. their associations relative to habitat availability, degree of fragmentation and degradation, and time of year and day. In particular, juvenile fish habitat associations are poorly understood (Riley et al. 2003, Perkin et al. 2010), as is whether there is a link between habitat degradation and hybridization rates. The South Llano River is one of the few places where genetically pure, naturally occurring populations of Guadalupe bass still exist (Koppelman and Garrett 2002, Broad 2008). However, human disturbances have caused habitat degradation and fragmentation along an upstream-downstream gradient (Edwards et al. 2004). The upper reaches are mainly undisturbed, while the lower reaches become increasingly degraded due to land use and fragmentation from road crossings, thus having the potential to limit fish passage and sediment transport. Conservation efforts dedicated to restoring habitat for Guadalupe bass are already underway in the South Llano River (Birdsong 2010). The Texas Guadalupe Bass Restoration Initiative, beginning in 2010, is committed to conserving Guadalupe bass populations by involving willing landowners in landscape conservation activities at watershed-scales. These types of activities include reducing or eliminating actions that degrade riparian systems and water quality, reduce water quantity, favor nonnative species, and fragment the river (TPWD 2010). However, there is no agreed upon benchmarks by which to determine whether these restoration activities are successful as there is no data on what the characteristics are of a healthy Guadalupe bass population. Similar studies on other black bass species have been completed to assess their population characteristics and habitat associations in response to a changing environment. For example, Kanehl et al. (1997) evaluated the response of smallmouth bass to the removal of the Woolen Mills Dam from the Milwaukee River. They demonstrated that before dam removal, smallmouth bass populations were low; however, after dam removal, habitat quality improved and smallmouth bass abundance increased substantially (Kanehl et al. 1997). Additionally, Peterson and Kwak (1999) suggested that land-use changes may be a greater detriment to smallmouth bass populations than projected climate change, and that the combined effects of both may lead to local species extirpation. Brewer et al. (2011) examined how human activities in a catchment influenced habitat conditions and use of smallmouth bass and concluded that young-of-the-year smallmouth bass mostly use low velocity habitats as well as deeper water when streams are impacted by pasture land use. These studies all portray the importance of establishing baseline data in order to understand a species’ population and whether restoration efforts focused on that population will be successful. Before we can proficiently address habitat restoration actions, we must first understand how an organism is associated with its physical environment under a variety of natural and altered landscape conditions. The overall goal of this study is to develop a better understanding of Guadalupe bass habitat associations and patterns in order to assist in the assessment of restoration efforts targeting this species. The objectives of this project are to: 1) Determine Guadalupe bass habitat associations and patterns. 2) Evaluate the effects of variations in habitat area, degree of fragmentation or degradation, and isolation on the age/size-specific probability of Guadalupe bass presence