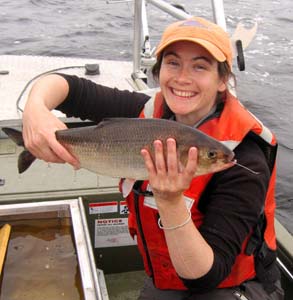 My previous research experience was on the West Coast, where I worked for both federal and state fisheries management agencies. My work at the USGS Columbia River Research Laboratory used acoustic telemetry to monitor the outmigration and survival of juvenile salmonids on the Columbia and Sacramento rivers. I have also worked for the Oregon Department of Fish and Wildlife comparing the spawning success of reintroduced hatchery and wild coho salmon in Calapooya Creek, and conducting salmonid habitat surveys for the Aquatic Inventories Project.. I am studying the behavior and demography of American shad in the Penobscot River. American shad populations have declined precipitously throughout the Penobscot River system as a result of both habitat loss and environmental degradation. Little is known about the remaining shad population, which is presumed to be less than 1000 fish, and is limited to approximately 48 river km of mainstem habitat downstream of Veazie Dam. Removal of the two lowest dams (Veazie Dam and Great Works Dam) as a part of the Penobscot River Restoration Project is anticipated to greatly increase access to spawning habitat for American shad throughout the Penobscot River system. My focus is on collecting baseline data for American shad prior to implementation of the Penobscot River Restoration Project. I am using radio telemetry to monitor the migration and behavior of tagged adult American shad throughout the lower river. In addition, I am conducting Dual Frequency Identification Sonar (DIDSON) imaging surveys at the base of the Veazie Dam fish ladder in order to generate length frequency distributions of fish approaching Veazie Dam. I hope to combine these two approaches in a mark-resight model and develop a population estimate for American Shad in the Penobscot River.