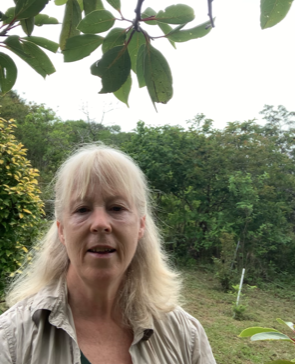 Debra Hamilton is a PhD student with the Vermont Cooperative Fish and Wildlife Research Unit studying migratory and tropical bird conservation. Deb has been an integral player in tropical conservation since the 1990’s. She studied the use of agricultural windbreaks as micro-corridors for forest dwelling birds, avian community changes in relation to climate change, and started the MoSI (overwintering survival of neotropical migratory birds) station in Monteverde. Deb was a founding member of the Fundacion Conservacionista Costarricense, a foundation with a mission to protect and restore forest habitat on Costa Rica’s Pacific slope to aid the recovery of the Three-wattled Bellbird (Procnias tricarunculatus). This program is now jointly run with the Monteverde Institute, where Deb was the Executive Director for over eight years. Her publications include articles on vocalizations, habitat use, and frugivory patterns of bellbirds, as well as tropical forest restoration topics.