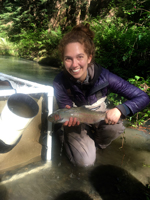 I am from Carlsbad, California and received my B.S. in Wildlife, Fish and Conservation Biology with an emphasis in Wildlife Biology from the University of California at Davis advised by Peter Moyle. My fieldwork has included avian point counts on the Seward Peninsula in Alaska, spawner surveys in California's Central Valley and shark surveys on the Southeast Farallon Island. Federal and state agencies, private consulting companies and non-profit organizations have all been employers in the past. These experiences have shaped my particular interest in restoration effectiveness and collaboration among agencies, non-profit groups and other stakeholders. With a lifelong enthusiasm for exploring natural processes and a love for fish biology, I will continue to pursue these themes at Humboldt State University.

My current research is focused on Pudding Creek, California using large wood restoration to increase salmon abundance, a before and after control impact experiment. Large woody debris augmentation to coastal creeks is a common means of restoration for salmonid populations, but relatively few studies of the effectiveness of these efforts have been performed. A multi-year, whole-system repeated measures Before-After-Control-Impact (BACI) experiment is being conducted on Casar and Pudding Creeks in Fort Bragg, California to evaluate population response of Coho Salmon and steelhead to the addition of large woody debris. The study began in 2012 and uses Pudding Creek as the experimental watershed and Caspar Creek as the control watershed. Large woody debris were installed to 80% of the anadromous habitat on Pudding Creek in 2015 using "Accelerated Recruitment" methodologies. The BACI study examines biological and physical responses to this treatment. This study is currently in post-treatment monitoring which will continue through 2020.