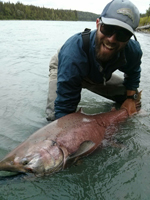 Chris joined the Coop Unit as a M.S. student in the Fall 2017 with Mark Henderson as his advisor. Chris received his B.S. degree from UC Santa Cruz in Ecology and Evolutionary Biology in 2010. Since that time he has worked with the U.S. Forest Service monitoring native populations of California Golden Trout and Mountain Yellow-legged Frogs in Sequoia-Kings Canyon National Park and in the Golden Trout Wilderness. He has also worked as a hatchery assistant, a Spotted Owl technician and as a staff scientist for Pacific Gas and Electric assessing environmental impacts. Chris' project is estimating the abundance and distribution of Salmonid Piscivores in the Sacramento-San Joaquin Delta using DIDSON acoustic cameras.