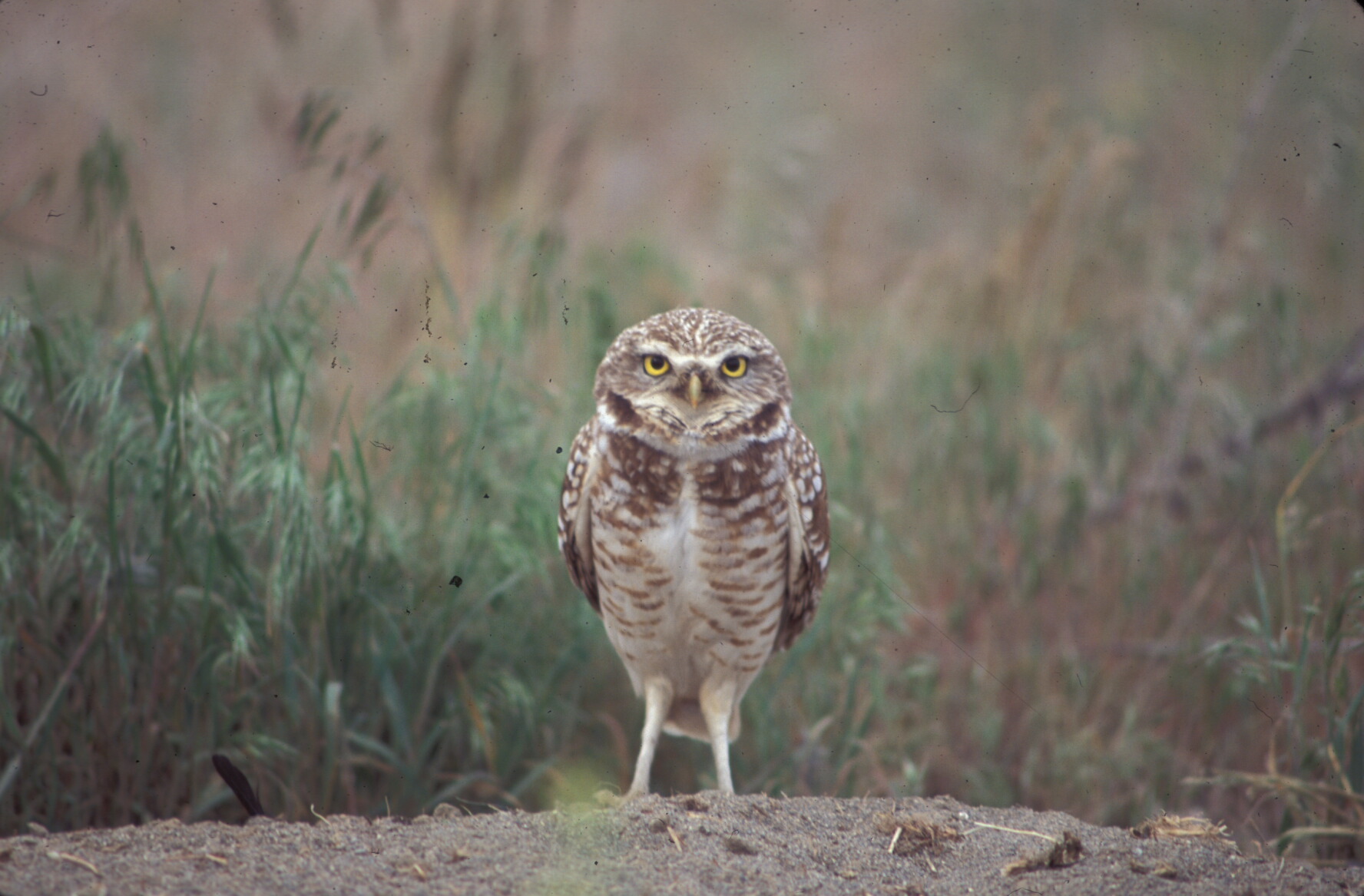 Project Synopsis:
We propose to attach “Geolocators” to 200 burrowing owls on numerous DoD installations throughout the western U.S. to identify their migratory routes and wintering grounds. This information will improve management for an At-Risk species that breeds on many DoD installations in the west. This is the first year of a 3-year project and one that builds upon a past Legacy project to address a critical need that was identified at a recent DoD-sponsored workshop in Oregon. The project represents a large collaborative partnership among 17 organizations including working closely with the Canadian Department of Defense and the Canadian Wildlife Service on this project. The use of this exciting new technology on this declining species will undoubtedly generate substantial positive media coverage that will benefit DoD and the Legacy program. The results will identify priority management needs for this declining species and help reduce conflict with the military mission on DoD installations.

Benefits to the DoD:
The project will benefit the DoD in general and also the 6 (or more) participating DoD installations throughout the western U.S. by providing explicit detailed information on the migratory timing, migratory routes, and wintering locations of burrowing owls that breed on DoD lands. This information is an important benefit, because without this knowledge, DoD will likely be expected to assume more and more of the management responsibility (or blame) for ensuring the persistence of burrowing owls in the U.S. as populations continue to decline. Without any knowledge of where owls on DoD installations migrate and overwinter, the only entity that can be made responsible for burrowing owls breeding on installations is DoD. Hence, greater knowledge of where “DoD owls” go during the migratory and wintering seasons will help spread the responsibility among the appropriate agencies, landowners, and countries. The project will also benefit the DoD because identifying the routes that burrowing owls take as they leave from (and return to) each participating installation during the spring and fall migratory seasons will help DoD personnel develop plans to minimize BASH problems. Knowing the migratory routes (and timing) that owls take as they leave the base each fall and return each spring will help guide practical decisions such as where NOT to install artificial burrows relative to runways (to avoid bird strikes). This knowledge will also help identify problems related to towers that are causing unnecessary mortality during migratory movements. And identifying the specific migratory corridors/routes will allow military commanders greater flexibility in using DoD lands that are outside of these corridors. The results may also help prevent burrowing owls from being listed as threatened or endangered by state and federal agencies in the U.S. Burrowing owls are already listed as federally endangered in Canada, and are listed as state endangered in several U.S. states. They have been petitioned for listing in several other U.S. states in recent years. Identifying migratory patterns and potential causes of decline on the wintering grounds will allow us to potentially reverse declines sooner and thereby prevent this species from being listed federally in the U.S. The results of this project will also identify critical areas along important migratory routes that need to be preserved and thereby identify key areas to target for habitat protection and restoration efforts. Finally, the project will benefit the DoD because it will help further identify DoD as a leader in the conservation of burrowing owls. As populations decline and more aggressive conservation measures are taken to ensure burrowing owl persistence, regulatory agencies will be able to see that DoD was funding projects to help conserve this high-profile species from the outset. Use of this exciting, new technology (Geolocators) to identify migratory patterns and wintering areas of a high-profile species-at-risk will undoubtedly generate substantial media interest. Indeed, we have already been contacted by the National Geographic Society who learned about our plans and want to help fund the project so that they can highlight it in their media outlets. The DoD and the Legacy program would benefit from such positive media coverage and would be identified as the leader of this effort. This project is a good example of integrating the goals of DoD's Integrated Natural Resource Management Plans (INRMPs) with those of the State Wildlife Action Plans (SWAPs) because burrowing owls are listed in INRMPs on many installations in the western U.S. and in the SWAPs of many western states. Moreover, most regional management planning efforts in the western U.S. (e.g., multi-species conservation plans such as the Sonoran Desert Ecosystem Initiative) include burrowing owl as a focal species. The proposed effort will undoubtedly be viewed as a crosscutting project using cutting-edge technology with partners in 3 countries to identify migratory pathways and wintering grounds of a high-profile species of international conservation concern. Burrowing owls appear to be changing their migratory behavior in response to global change (Macias-Duarte 2011); this project will provide the piece of the puzzle currently missing (exact wintering locations) that would allow us to fully evaluate the extent of those changes. DoD would benefit from participating as a leader in this national and international conservation initiative on burrowing owls, and would help ensure that DoD interests are given proper consideration in future conservation plans. This project will be run through the Desert Southwest Cooperative Ecosystems Studies Unit (DSCESU). Hence, the project will further demonstrate DoD’s commitment to the CESU program and will help encourage additional partners to contribute to the project.