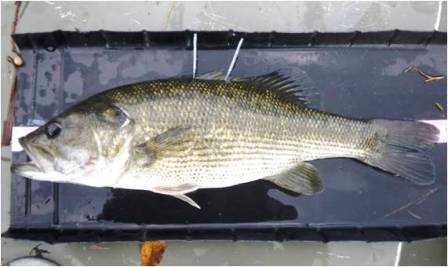 Guadalupe bass Micropterus treculii is a black bass species endemic to the Edwards Plateau in central Texas. Guadalupe bass (GB) has been identified as a species of greatest conservation need by Texas Parks and Wildlife Department and is the target of intensive conservation and restoration efforts. The species faces several challenges ranging from habitat alteration and fragmentation to climate change impacts, but threats and impacts due to extensive introgressive hybridization with introduced smallmouth bass (SMB) Micropterus dolomieu. While GB is the target of intensive conservation and restoration efforts throughout its range, there are significant information gaps on many aspects of the basic biology, ecology, and behavior of the species that need to be addressed in order to adequately assess the effectiveness of these efforts. The proposed research aims to address some of these information needs by focusing on three key questions. 1. What are the demographic characteristics of a Guadalupe bass population? To date, there has not been a comprehensive attempt to estimate the size of a GB population. Not only is this information critical to monitor trends in abundance, response to restoration activities and changes in the status of the species throughout its range, but also is needed to evaluate the impacts and effectiveness of GB stocking programs. 2. How has introgressive hybridization affected the performance, fitness and population viability of Guadalupe bass? The threats to the long-term persistence of GB posed by extensive introgressive hybridization with introduced SMB are perhaps the least understood of the challenges facing GB populations. It is unclear how the physiology and behavior GB x SMB hybrids differ from that of pure-strain GB. Further, how hybridization might influence the viability of affected populations is unknown. Understanding how physiological performance and behavior has been affected will allow more informed decisions regarding conservation, restoration, and management decisions for GB as well as better predictions of the potential outcome of stocking efforts aimed at reducing introgression rates. 3. Does the reproductive ecology of Guadalupe bass represent a potential risk factor to the persistence or recovery of the species? Guadalupe bass has been reported to exhibit a similar reproductive strategy to that of other centrarchid fishes in the genera Micropterus and Lepomis. The general pattern for this fishes involves the males preparing a shallow depression in the substrate that is defended from conspecific males. The males attempt to attract females to these nest sites where display and courtship ensues. If females deposit eggs in the nest, they are chased away and the male guards and cares for the eggs and larva. After a period of development, the juveniles disperse from the nest to nursery habitats. While GB likely follows this general pattern, most aspects of the species-specific reproductive ecology, such as the degree of habitat specificity and communality and inter- and intra-specific interactions during spawning, are unknown. While the reproductive ecology of GB may prove interesting in its own right, it is critical to understand the requirements of the species during spawning to ensure that the quantity and quality of spawning habitat is not a limiting factor to GB population recovery.