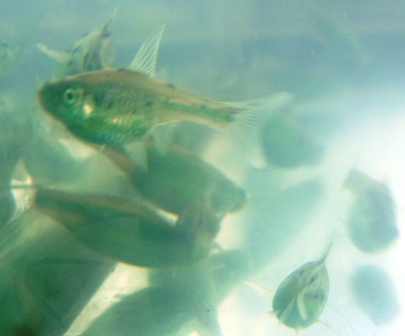 Arkansas River shiner (ARS) Notropis girardi is among the better-studied pelagic broadcast-spawning cyprinids, yet there is still uncertainty regarding the reasons for its decline. This small (<5.0 cm TL) cyprinid is endemic to the Arkansas River Basin throughout Oklahoma, Western Arkansas, southern Kansas, northern Texas, and northwest New Mexico (Cross 1967, Gilbert 1980, Robinson and Buchanan 1988, Miller and Robison 2004, Thomas et al. 2007). However, ARS has been extirpated from much of its original range including Arkansas (Robinson and Buchanan 1988) and Kansas (Cross et al. 1985, Haslouer et al. 2005b). Collections in Oklahoma have shown that this species is restricted to the South Canadian River and the upper Cimarron River basins (Pigg 1991, Pigg et al. 1999a). Records from Texas and New Mexico have also indicated a decline in this species (Sublette et al. 1990, Bonner et al. 1997, Bonner and Wilde 2000). In Texas and Oklahoma, ARS populations have not shown signs of recovery and prolonged drought conditions are believed to have continued to take a toll. In 1998, the United States Fish and Wildlife Service listed the ARS as a threatened species under the Endangered Species Act (Allen, 2004). The swift rate of ARS decline has been attributed to a suite of environmental changes (i.e. temperate, drought, etc.) resulting in consistently unsuccessful reproduction. For example, insufficient stream segment lengths to allow the completion of development has consistently been implicated in the decline of ARS populations (Bonner and Wilde 2000). However, how this critical stream length varies with the interaction between the physiochemical environment and the development rate and buoyancy characteristics of developing ARS is not currently understood. Temperature, conductivity, total suspended solids, flow, and channel geomorphology may alter the buoyancy and developmental rates of eggs and larvae and thus influence habitat requirements, such as stream fragment length and minimum current velocities, as well as hatching success of ARS and other pelagic-spawning cyprinids (Cowley et al. 2005). I used a full factorial experimental design to assess the effects of temperature, total dissolved solids, and total suspended solids to determine egg buoyancy, minimum current velocity needed to keep ARS eggs in suspension, developmental rate, hatching success and survival of the eggs and larvae of ARS. Understanding how these factors affect the early life history stages could potentially explain their consistency in decreasing populations throughout the Great Plains ecoregion. These finding will not only support ARS, but all species within this reproductive guild as they are affected by climatic and landscape use changes.