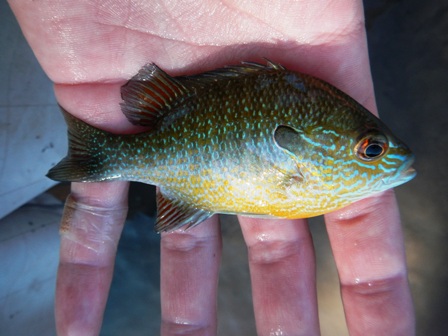 The South Llano River is still considered to be a minimally disturbed system (Stoddard et al. 2006) with the highest levels of habitat degradation located downstream near Junction, Texas. As one of the remaining unregulated rivers in Texas it has been described as a pristine and ecologically healthy river supporting several endemic species and typical fish assemblages found throughout the region (Linam 2002; Hubbs 2008). Minimally impacted systems like the South Llano River can be a valuable tool for managers by using it as a regional reference site (Stoddard et al. 2006; Hughes 1986). Reference sites can be used as a “benchmark” for disturbed streams by providing a feasible picture of desirable water quality, habitat structure, and species richness (Hughes 1986). More importantly, reference sites can provide information on species assemblage structure and distribution in relation to environmental variables. The objective of this study is to assess the fish assemblage habitat relationships at multiple instream scales to conclude which variables and at different spatial scales have the most influence on determining fish assemblage structure in this region. To accomplish this I will compare fish communities their habitat associations throughout the study area. This will include comparing associations at the site scale, mesohabitat scale, and upstream to downstream reaches. I will also be comparing the fish communities across different gradients of disturbance by examining species distribution in the less disturbed (upstream) and more disturbed (downstream) reaches. Ultimately, this information could potentially provide the appropriate standard or “benchmark” (Hughes 1986) for other river ecosystems in the Edwards Plateau region and provide managers with potential repercussions that may come with any future alterations to stream and landscape habitats at various spatial scales in the region (Gido et al. 2006).