The Role of Barriers in the Conservation of McCloud Redband Trout 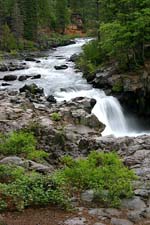 In 1994, the U.S. Fish and Wildlife Service determined that potential threats to the McCloud River redband trout (Oncorhynchus mykiss spp.) and its habitat were sufficient to warrant classification as a Candidate species under the federal Endangered Species Act of 1973, as amended. This status reflected concern over threats to its genetic integrity from genetic introgression with stocking of hatchery strains of rainbow trout. In 1998, a multiple-signatory conservation agreement was established to ensure that steps are taken to reduce or remove threats that could cause it to be listed as threatened or endangered. Due to commitments made to protect and conserve McCloud redband through this agreement, candidate status was discontinued in 2000. Among potential strategies to achieve conservation goals is isolation management, employing the use of natural or artificial barriers to protect upstream populations from direct contact with hatchery or exotic salmonids. This approach has been adopted for other threatened species or populations, and may be particularly appropriate in river ecosystems where movement corridors are well-defined and animal passage easier to control. The success of this approach hinges on providing sufficient resources in the isolated reach to meet all life history requirements, as well as on maintenance of a sufficiently large population to promote long-term persistence. To assist in conservation efforts, this study seeks to explore the feasibility of adopting an isolation management strategy for redband trout by identifying barriers and evaluating their functional roles in streams within its established refugium. With a goal of evaluating the potential effectiveness of isolation management as a conservation strategy for redband trout populations, the objective of the proposed research are: 1) to identify existing and potential barriers in selected streams within the established redband trout refugium, and to establish the range of flows within which barriers are operational; and 2) to evaluate the extent to which an existing barrier in Moosewood Creek limits redband trout productivity in the isolated section and/or protects if from threats imposed by the presence of hatchery or exotic salmonids. Implications of the study to redband trout populations in Sheepheaven Creek, recently identified as the primary location of the source population, will be explored.