Production of myxospores of Ceratomyxa shasta in Chinook salmon carcasses 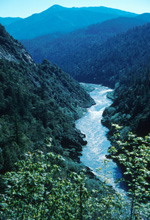 Ceratomyxa shasta is a myxozoan parasite of salmonids that produces the disease ceratomyxosis. Infected fish can be found throughout the Klamath Basin but the stage infective to fish appears largely limited to the main stem of the Klamath River (Hendrickson et al. 1989, Stocking et al. 2006). Recent studies monitoring prevalence of selected fish pathogens in smolts sampled during outmigration implicated C. shasta as the direct cause of extensive losses in Chinook salmon (Williamson and Foott 1998, Foott et al. 1999, 2002, 2003). Foott et al. (2002) suggested that ceratomyxosis appeared to be the leading cause of disease and death in juvenile Chinook salmon in the Klamath River and estuary during summer of 2001. Williamson and Foott (1998) and Foott et al. (1999) suggested that reduced levels of infection the the Klamath River estuary as compared to the main river was due to death of infected fish prior to reaching the estuary. One management action being considered to control C. shasta in the Klamath Basin is the removal of spawned out carcasses. However, we do not have a very clear understanding as to what this might accomplish. We need to know (1) what percentage of carcasses are infected, (2) if all infected carcasses produce myxospores, (3) when myxospores are released from decaying carcasses, and (4) how many myxospores are produced by a single decaying carcass. The overall goal of this project is to answer some of these questions. With this information we can determine whether or not carcass removal might be an effective management option and how it might best be applied in the Klamath Basin. This information would also be valuable for building a mathematical model that might suggest management strategies that might be successful in reducing mortalities due of C. shasta in the Klamath River Basin.