Protection and Management of Seabird Colonies in South Carolina 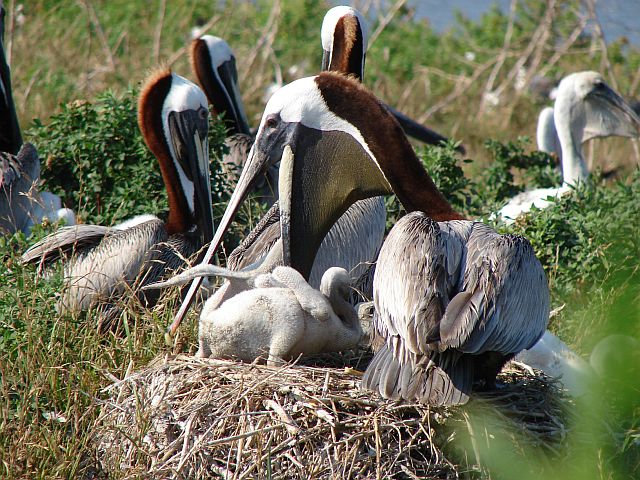 Seabirds nest in colonies on approximately nine islands along the coast of South Carolina. These islands are characterized by sandy beaches, absence of mammalian predators, low vegetation, and an upland that provides habitat for nesting shorebirds and colonial seabirds. One of the main challenges faced by managers at these colonies is balancing the needs of breeding and migratory birds with those of island visitors. The goal of the study is to monitor seabirds and collect baseline measures of breeding parameters to better evaluate the health and condition of seabird populations at protected nesting islands. The first objective of this study was to map habitat use by seabirds during the breeding season. To meet this objective we conducted intertidal surveys during the 2007 and 2008 breeding seasons to identify areas of high bird use. We conducted 12 surveys at Crab Bank, 18 surveys at Bird Key Stono, and 17 surveys at Deveaux Bank. We also measured habitat characteristics of the intertidal zones of these three islands. Over 30 species of waterbirds were recorded during these surveys, and data suggest that use varies spatially and temporally during the breeding season. Our next objective was to measure reproductive and behavioral parameters of breeding seabirds. In 2007 and 2008 we measured Black Skimmer (Rynchops niger) nest success at three nesting islands. Across all colonies and years, mean hatching success was 0.45 ± 0.26 chicks hatched per nest and mean productivity was 0.27 ± 0.21 chicks fledged per pair. Temperature loggers were placed in 108 nests to determine the effect of temperature patterns during incubation on nest success; these data are being analyzed. Brown Pelican (Pelecanus occidentalis) reproductive parameters were monitored during all years of the study. Across all colonies and years, mean hatching success was 2.0 ± 0.26 chicks hatched per nest and mean productivity was 1.48 ± 0.26 chicks fledged per pair. We recorded provisioning and attendance behavior of pelicans at the Deveaux Bank colony in 2008. These data are being analyzed and will be comparable to those published by Sachs and Jodice (2009) from Crab Bank. Our final objective was to determine condition and health of seabird populations. To meet this objective, we monitored health parameters of 43 nestling Brown Pelicans to establish reference values and investigate the role of ticks nestling health. The field work portion of this study was completed in October 2008. A final report was submitted in June 2010 and the dissertation is currently being prepared for defense.