Minimum Habitat Requirements of the Indiana Bat in the Champlain Valley 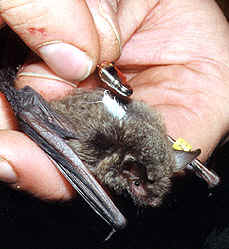 Indiana bats are medium-sized, brown bats less than 2 inches long that live in the Eastern and Midwestern United States. The Indiana bat was listed as endangered in 1967 under the federal Endangered Species Act of 1973. About 350,000 individuals of this species still exist. Human disturbance, cave commercialization, habitat loss, and pesticides are identified as potential threats to the persistence of this species (USFWS, 1991). The Indiana bat’s natural history is similar to other Myotis species. They hibernate in caves or abandoned mines during the winter. During summer, females roost under the peeling bark of dead and dying trees in groups (maternity colonies) of up to 100 bats or more. Breeding females in the colony give birth to a single pup per year. The mother nurses the young, and young stay with the maternity colony throughout most of their first summer. Migration to the wintering caves usually begins in August, and bats mate in early October before they enter caves for hibernation. Current conservation efforts in Vermont and New York are devoted towards protection of hibernacula. However, a full, well-integrated understanding of the summer needs of individuals has yet to be reached. This lack of knowledge potentially impedes wildlife managers from identifying critical resource needs throughout the annual cycle. Information gaps include 1) information on the identification of roosting and maternity trees in the Champlain Valley, and 2) identification of critical local and landscape habitat features that support roosting, maternity, and feeding behaviors. The Vermont Cooperative Fish and Wildlife Research Unit has partnered with the Susi von Oettingen (USFWS), Scott Darling (Vermont Fish and Wildlife Department), and Al Hicks (New York DEC) to conduct research to fill these key information needs.